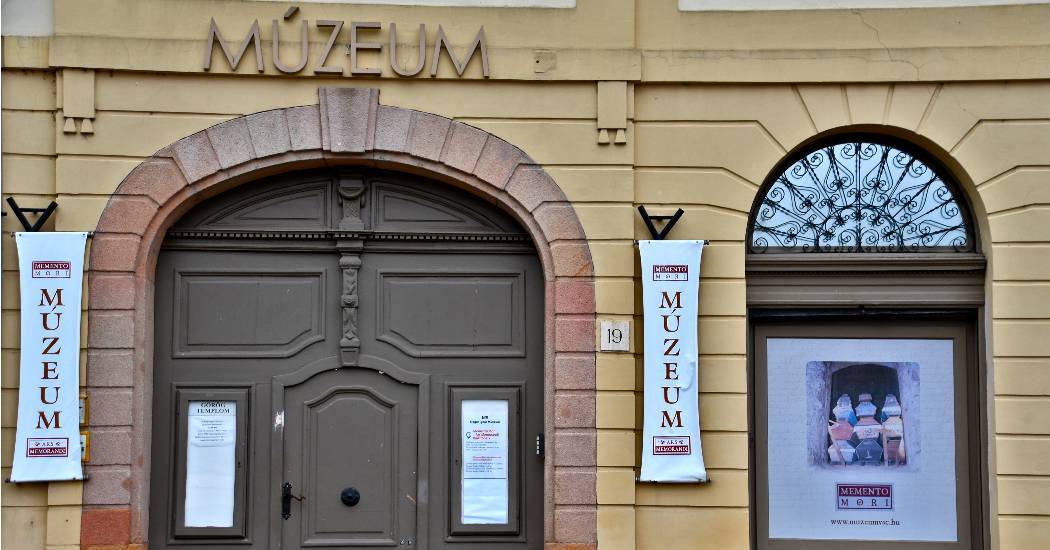 MuseumTrip takes you on an in-depth journey to discover the many layers of knowledge kept within museums. Hungarian Museums Online visits a new museum every fortnight (the 1st and 15th of every month) to discover and present the history, collections, research activities and programmes of these – major and minor, older and newer – institutions.

Our first trip takes us to Vác and its Ignác Tragor Museum. Join us and discover the extraordinary story of the museum!

The Ignác Tragor Museum is the oldest museum in Pest County. The museum will celebrate its 125th anniversary in 2021, since its predecessor, the Museum Association of Vác – after attempts in 1881 and 1887 – was finally established during the nationwide surge of the millennium events in 1896. The Association accepted Mihály Bauer's draft charter on 15 February, 1895, and after having been approved by the Ministry of Internal Affairs, the Association held its inaugural meeting on 27 December, 1896 at the City Hall's grand hall. The aims of the Association and the Museum’s mission were stated in the charter as follows:

‘The goal is to establish a museum and library of archeology and applied arts, serving as the foundation for a future school of commerce and industry'.

The tasks of the museum include

a, collecting, preserving and presenting primarily local geological, prehistorical, historical, artistic, literary, industrial and educational memories of the past for public interest.

b, collecting, classifying and exhibiting historical memories of the present, regional and ethnographical data, geological findings, exceptional crude products, industrial and art masterpieces to facilitate their study and research.'

A promising start was followed by times of uncertainty. The museum, installed in one of the rooms of Mihály Bauer's house, closed “temporarily” in February 1898. From then on, the museum’s collection kept gathering dust in rented warehouses. This might have spelled the end of the project were it not for a certain young local history enthusiast called Ignác Tragor. Tragor initially became secretary of the Museum Association of Vác in 1896, and was elected its President in 1906. He played a major role in establishing, developing and preserving the museum in Vác, in securing funding from the city and the state, and his efforts kept the museum running. He was an editor of the series Books of Vác, as well as the author of several volumes.

It was finally a church aid that put the museum back on track. The Museum Association was able to rent three rooms of the Diocesan Library in 1912 and thus gained sufficient space to make a proper, public exhibition. The “Collection Register of the Museum of Vác” was compiled and published on this occasion. As there were no inventory ledgers, this register provides great help in reconstructing the collection of the period.

Although there were plans to build a museum, there were never sufficient funds available for the Association. Hopes for their own exhibition space became plausible when on 2 February, 1918, Honorary Ministerial Counsellor and professor emeritus Imre Pauer offered his birthplace in Papnevelde utca – today 4 Múzeum utca – for cultural use by the city. Litigation ensued following the endowment, and the exhibition was opened only on 10 May, 1931. Following the death of Ignác Tragor in 1941, Piarist teacher Márton Bán took over both the museum and the Association. He held both positions until the nationalisation of private assets. The building sustained damage during bombing raids in 1944, the exhibition was vandalised, many artefacts were looted or destroyed, some of the archives burned. In 1949, despite investigations finding the museum’s operations to be exemplary, the Museum Association of Vác was liquidated.

The nationalized museum had a rather obscure period between 1949 and 1952. The old inventory ledgers were gone, so it was impossible not only to reacquire the collection, but information regarding the remaining artefacts was lost. Directors came and went rapidly, it seems there had been trouble with finding a competent manager for the collection. Taking a new inventory began in 1952, with very few items making it into the inventory book compared to the previous collection. In the 1950s the museum in Vác was one of the one-person museums in the country. The museum was given the name “Vak Bottyán” in 1952. It was a strange naming, as the city’s only encounter with the general of Rákóczi’s War of Independence was when he – still as an officer of the Hapsburg Empire – ordered that the town be burned down.

With the reorganisation of the national museum network in 1963, the museum, classified as a country museum, became a member of the Pest County Museums Directorate. Its collection area included the city of Vác, the surrounding areas around Vác and Szob, and the northern parts of the Gödöllő district. From the end of the 1960s each of the individual collections had their own curator nominated. Collecting also became more methodical and intensive. Pauer’s house was already too small and obsolete in the early 1960, there were plans to move the museum to a more deserving venue. The museum’s exhibition spaces were expanded in the 1970s to include the Greek Catholic church, and in the 1980s, the Hincz Collection.

After the end of Communism in Hungary, the museum took the name of Ignác Tragor on 1 May, 1990. In 2003 the institution moved from the Pauer house to 41/a Zrínyi utca, where the stock rooms, workshops and offices are located – there are no exhibitions in the building.

From 2013 the museum is maintained by the Vác city council, with a collection area of 38 towns outside of Vác. The collection scope that originally consisted of local history, ethnography, fine arts and archeology, from 2016 includes applied arts. In October 2016, Pannónia House and its collections titled “Art Collections of the city of Vác” were also incorporated into the museum.

Since achieving independence, the museum has its own image, website (www.muzeumvac.hu) and social media coverage to attract visitors.

The museum’s most famous collection is the 18th century Dominican crypt’s artefacts of Vác, which it acquired following the excavations during 1994-95. The exhibitions Ars Memorandi (2015) and Memento Mori (2016) are based on the above trove.

The Ignác Tragor Museum is a member of the Association of Hungarian Country Museums.

The greatest challenge the museum faced in its 125 years of history was the lack of a proper museum building. The construction of a new museum quarter was announced in 2017 (1550/2017. (VIII. 18.) Government Decree) which gives hope that the collections and exhibitions of the museum may finally find a deserving place.