Japonisme in the Austro-Hungarian Monarchy 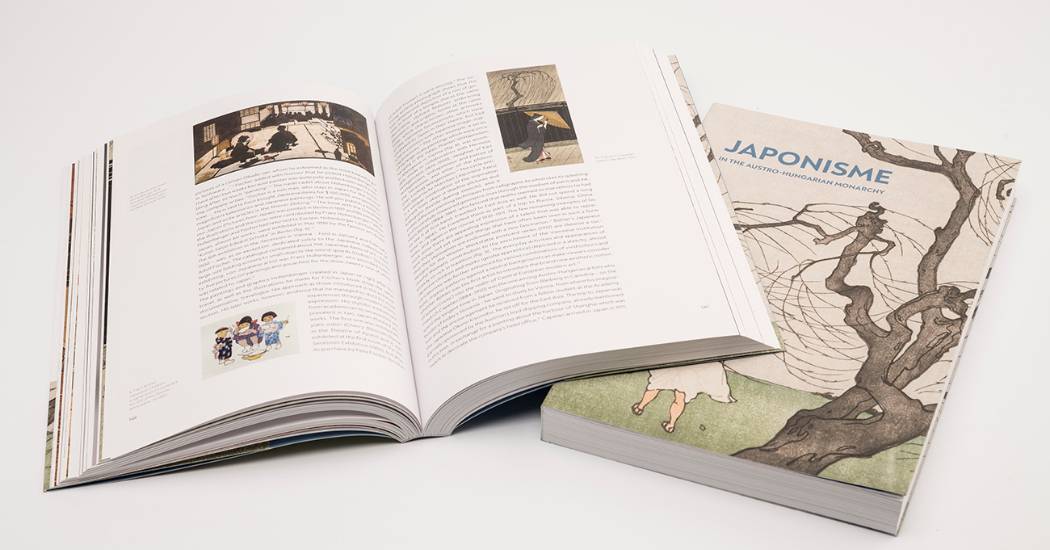 The volume Japonisme in the Austro-Hungarian Monarchy was dedicated to the celebration of the 150th anniversary of diplomatic relations between Japan and the countries which used to belong to Austria-Hungary, conducted by the Museum of Fine Arts – Ferenc Hopp Museum of Asiatic Arts in Budapest.

Representatives of the Austro-Hungarian Monarchy and Japan signed the Treaty of Navigation, Commerce and Friendship in Tokyo on 18 October 1869, which had an impact on international policy between the parties, facilitated the development of trade and enhanced cultural transfer. Although the Monarchy disintegrated into many successor states in 1918, the predilection for Japanese art and culture remained an important part of the common cultural history of East-Central Europe. This volume aims to present the recognition and appreciation of Japanese culture as something new and inspiring for the people but mostly for artists in the region.

The present volume is the fruit of a three-year-long collaborative project of Japonisme experts from countries which once formed the Dual Monarchy. The seventeen academic contributions are divided into four thematic segments. A New Acquaintance introduces the reader to the historical, political, cultural milieu of the inception of Japonisme in East-Central Europe – which was as special for the young Monarchy as it was for the newly restored Japanese Empire. Part Two, Travelling Artworks, concentrates on the reception, collecting and interpretation of Japanese works of art in Central Europe. The third unit, Artists and Artworks, discusses classic themes of Japonisme, such as painting, graphic arts, ceramics, glassmaking, and theatrical arts with a twist. Catalysts of Japonisme, the last segment concentrates on the cultural, political, social phenomena and ambience in Central Europe, which provided a fertile ground to the embracing of Japan, its culture and made citizens of the Monarchy more open to new impulses arriving from the East than ever before.

The starting point for the volume is the departure of the first delegation to Japan in 1868 from the port of Trieste. After the end of the voyage in Tokyo, the reader can accompany the Japanese – guests of the 1873 World's Fair – back to Vienna. We examine what kind of Japanese merchandise was sold by the Au Mikado shop in Vienna, by Mr Vanek in Budapest, by C. Trau in Trieste and by Stanek’s in Prague, as well as what curios could a Yokohama tourist buy at Kuhn & Komor, the only shop on Mizumachi’s main street which was run by loyal subjects of the Monarchy. We look into the organizing principles of the Monarchy’s large Japanese collections based on economic, pedagogical, and aesthetic terms. We explore the impact of the example of Japan, that affected the development of the sense of national identity of peoples in Central Europe, the different meaning of orientalism in the region compared to Western Europe, and we observe the image of Japan, conveyed through the illustrated press of the late nineteenth century about the eastern most country that opened its gates for the West. Travelling artists from the Monarchy recount what they experienced in Japan, and those who never visited Japan testify to what they drew from the art of the Far East and how they integrated the new knowledge into paintings, graphics, or objects of applied art. We provide a summary on the impact of Japanese travelling performers who appeared on the stages of the Monarchy (jugglers, dancers, actors). We can find out how Japan was present in the iconic cafes of the Monarchy, what role women played in popularizing Japanese culture, and what weight actual politics played in the growing sympathy for Japan (and its culture). The journey ends with the dissolution of the Austro-Hungarian Monarchy in 1918.

The authors and editors hope that the present book will prove worthy to become a tangible memory of the 150-year-long respect and appreciation of Japan and its culture in the East-Central European region, our common heritage, as well as to ignite new, original, and challenging initiatives in the field of Japonisme research in our region and beyond.